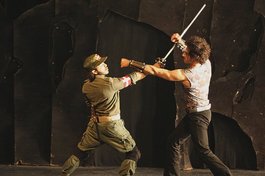 I was born and raised in Montreal. I live in New York City. Montreal bagels win.

Once upon a time, I played a ninja. Which is noteworthy because if you were to meet me, you would likely never think “he might be ninja.” Then again, those are usually the best ninjas, so…

I am a huge fan of commercial auditions.

Haribo Gold Bears are a perfect food. Unless you consider their nutritional content. Nutrients aside, perfect.

I was nominated for the best lead actor award in the 2010 Midtown International Theatre Festival for my performance as Aaron in Can I Really Date A Guy Who Wears a Yarmulke?

Rekindled was awarded the best overall film award at the 2006 DVX User Horrorfest.